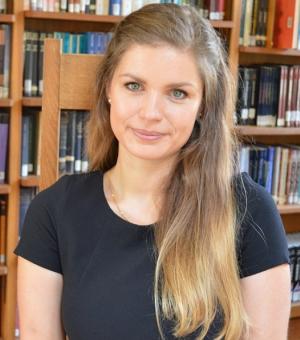 Dr Diana Leca is the Robin Geffen Career Development Fellow in English at Keble College, Oxford. She specialises in twentieth-century poetry and poetics, with a focus on short forms. Her broader research interests include American lyric poetry, critical theory, aesthetics, natural history, and the environmental humanities.

Her current book project considers how short-form poems register ecological dilemmas. In chapters on miniaturised sonnets, haiku, field notes, and monostichs, she examines the work of a variety of poets, including Lorine Niedecker, Wallace Stevens, Richard Wright, Robert Grenier, Harryette Mullen, and Kay Ryan. Additionally, she has a long-standing interest in theory, particularly the late work of Roland Barthes, on whom she has a forthcoming publication in the journal Paragraph. An article on Kay Ryan’s eerie miniature sonnets will also appear in Sonnets from the American: An Anthology of Poems and Essays with Iowa Press in 2022.

Her research has received support from the Gates Foundation, the Harry Ransom Center, and most recently the Huntington Library in California, where she received the Mayers Fellowship to conduct archival work on Wallace Stevens' ecological aphorisms. She completed her doctorate at St John's College, Cambridge on literary minimalism.

Literature and criticism from the early 19th century to the contemporary.

You can find my Keble page here.