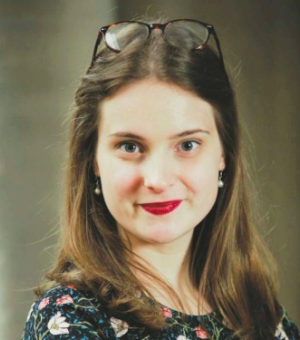 Doctoral Research: The provisional title for my AHRC-funded doctoral thesis is 'Meanings in Membranes: The Materiality of Parchment and the Medieval Perception of Devotional Texts'. This thesis will explore how the production process and materiality of parchment influenced readers' engagement with late-medieval devotional texts. I am particularly interested in how the skin of the text, the skin of the animal, the skin of the reader and the skin of the holy body contribute to eliciting affective devotion, and how the shepherd, scribe, and seller would have perceived the text as an object.

Outside of my DPhil I enjoy creating events which broaden the public's perception of the medieval. I co-organised the Oxford Medieval Church Crawl and the Oxford Medieval Pilgrimage Day with fellow English DPhil Rebecca Menmuir, and am currently working as the student administrator on the Oxford Medieval Mystery Cycle as well as co-producing and presenting a AHRC-TORCH funded podcast, 'Living Libraries' with History DPhil Alexander Peplow.