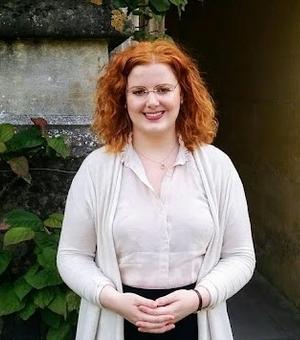 MA in English Literature and Linguistics (University of Vienna)

BA in English Literature and Linguistics (University of Vienna)

In my research, I study the poetics, theology, and art of apophatic absorption, and the continuum from cataphatic representation to the unsayable. I specialise in late medieval contemplative writing, religious and catechetical texts, as well as (illuminated) manuscripts in Middle English and Latin. Building on a background in medieval literature and art history, other areas of interest are the relationship between the visual and the verbal, book history, and the material text.

My AHRC/Scatcherd-funded doctoral thesis examined Julian of Norwich’s understanding of contemplative nothingness, the divine, and the self through the apophatic-cataphatic matrices of love and dread and was written under the supervision of Vincent Gillespie. I am currently preparing it for publication as a monograph. I was the first person from my country (Austria) to be admitted to pursue a DPhil, and preceding MSt, in Medieval English Literature at Oxford, and an MA in Medieval Art History at the Courtauld, and I was the first in my family to attend school past the age of sixteen and go to university. As a doctoral student, I was appointed a Public Engagement Research Associate at the Ashmolean Museum, worked as a member of the “Talking Sense” research cluster, and was the Academic Representative of Lady Margaret Hall’s MCR, preceded by a stint as a cataloguer for the Courtauld Institute of Art’s Gothic Ivories Project.

The then newly discovered Chastising of God’s Children manuscript that the Bodleian Library acquired was my starter project at Oxford for my MSt, and I began my work on it when it had not even been foliated. The first account uncovering the Latin source texts and strategic scribal alterations, including a manuscript tree, a transcription, and variants, came out with JEBS. Before that, my first MA thesis was published as the book “Familial Discourses in the Book of Margery Kempe. ‘Blyssed be the wombe that the bar and the tetys that yaf the sowkyn’”, which has won several prizes and is now listed as one of 15 reference works on Margery Kempe’s life in Barry Windeatt’s new Penguin edition. Recently, I have written on Bridget of Sweden, and I am co-organising the conference "New Visions of Julian of Norwich" at Somerville College/Oxford this summer.

Teaching: I have taught a wide range of texts from the early to the late Middle Ages at Lady Margaret Hall, Hertford, and Wadham, supervised undergraduate dissertations and lectured at Oxford’s English Faculty. At Somerville, I currently teach late-medieval English literature from 1350-1550.

Personal interests: opera, the Lieder repertoire, the history and interpretation of silence, abstract art, nature. Here is a recent article about me as a 'hidden champion' (on p. 7): https://issuu.com/univie/docs/110650_univie_3_2021_screen.