British Romanticism and the Critique of Political Reason 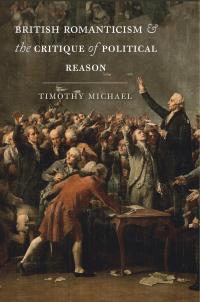 What role should reason play in the creation of a free and just society? Can we claim to know anything in a field as complex as politics? And how can the cause of political rationalism be advanced when it is seen as having blood on its hands? These are the questions that occupied a group of British poets, philosophers, and polemicists in the years following the French Revolution.

Timothy Michael argues that much literature of the period is a trial, or a critique, of reason in its political capacities and a test of the kinds of knowledge available to it. For Wordsworth, Coleridge, Shelley, Burke, Wollstonecraft, and Godwin, the historical sequence of revolution, counter-revolution, and terror in France—and radicalism and repression in Britain—occasioned a dramatic reassessment of how best to advance the project of enlightenment. The political thought of these figures must be understood, Michael contends, in the context of their philosophical thought. Major poems of the period, including The Prelude, The Excursion, and Prometheus Unbound, are in this reading an adjudication of competing political and epistemological claims.

This book bridges for the first time two traditional pillars of Romantic studies: the period’s politics and its theories of the mind and knowledge. Combining literary and intellectual history, it provides an account of British Romanticism in which high rhetoric, political prose, poetry, and poetics converge in a discourse of enlightenment and emancipation.