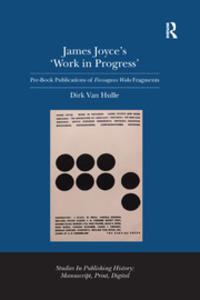 The text of Finnegans Wake is not as monolithic as it might seem. It grew out of a set of short vignettes, sections and fragments. Several of these sections, which James Joyce confidently claimed would "fuse of themselves", are still recognizable in the text of Finnegans Wake. And while they are undeniably integrated very skillfully, they also function separately. In this publication history, Dirk Van Hulle examines the interaction between the private composition process and the public life of Joyce's 'Work in Progress', from the creation of the separate sections through their publication in periodicals and as separately published sections. Van Hulle highlights the beautifully crafted editions published by fine arts presses and Joyce's encouragement of his daughter's creative talents, even as his own creative process was slowing down in the 1930s. All of these pre-book publications were "alive" in both bibliographic and textual terms, as Joyce continually changed the texts in order to prepare the book publication of Finnegans Wake. Van Hulle's book offers a fresh perspective on these texts, showing that they are not just preparatory versions of Finnegans Wake but a 'Work in Progress' in their own right.