Our outreach officer Rebecca has been driving around the country visiting lots of different state schools this term, with some of the English Faculty’s wonderful DPhil (PhD) students delivering academic workshops to Year 10 school students. The visits were designed to help inspire young people to pursue the study of English at A Level and beyond, and to illustrate just how wide-reaching and broad an English course at university can be.

Franziska Kohlt ran multiple fascinating workshops in schools across Lincolnshire, entitled ‘Alice goes political (and what she found there) – The hidden politics of wonderland and how to find them’. Students explored Lewis Carroll’s poems found within Alice’s Adventures in Wonderland and discovered that they were parodies of existing poems. Groups discussed why Carroll might have chosen the metaphors that he did and this discussion fed into a debate about what Alice’s Adventures in Wonderland might have looked like had it been written today. By looking at historical sketches and cartoons, students discovered that no Prime Minister has escaped depiction as a character from the story, and then they discussed the way the story is used as a metaphor for confusion and madness. Alice's Adventures in Wonderland gave the students a medium, indeed a language through which to engage with their political opinions, and find a common ground in discussing underlying issues. 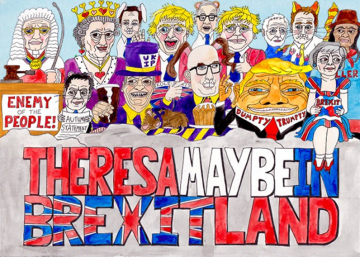 Exploring the intersections of identity

Lloyd (Meadhbh) Houston delivered workshops across the North East of England, entitled ‘Does it matter who you love? Learning to Think Intersectionally.’ Lloyd (Meadhbh) offered an insightful and thought-provoking session where students delved into the differences between sex and gender, exploring the connotations of using phrases such as ‘like a girl’ and unpicking what it means to be oppressed. The workshop examined the critical writing of Bell Hooks and a short story by Langston Hughes, and explored where different elements of a person’s identity ‘intersect’. School groups investigated what it means to consider who we are, and how we can look at a literary character through the various oppressions they might experience. 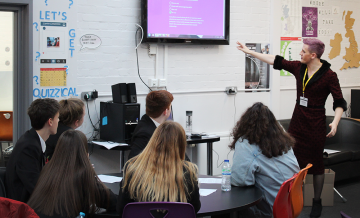 Joint Honours: Not just for when you can’t make your mind up!

'It's never too late'

"What about Oxford?" Studying English here as a mature student