The Plays and Poems of Nicholas Rowe 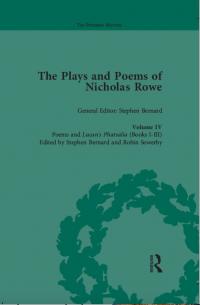 Nicholas Rowe was the first Poet Laureate of the Georgian era. A fascinating and important yet largely overlooked figure in eighteenth-century literature, he is the ‘lost Augustan’. His plays are important both for the way they address the political and social concerns of the day and for reflecting a period in which the theatre was in crisis.

This five volume edition, the first complete scholarly edition of his plays and poems, of which Dr Stephen Bernard is the general editor, sets out to demonstrate Rowe’s mastery of the early eighteenth century theatre, especially his providing significant roles for women, and his major work as a poet, and translator of Lucan's Pharsalia, which was both innovative and deeply in tune with current practices as exemplified by John Dryden and Alexander Pope.

Ten years in the making, this edition of all Rowe’s plays, poems (English, Latin, and Greek), and translations, is accompanied by 15 scores of the incidental music which accompanied his plays, and 31 black and white illustrations.

The work on this edition has been supported by the Faculty of English Language and Literature at the University of Oxford.