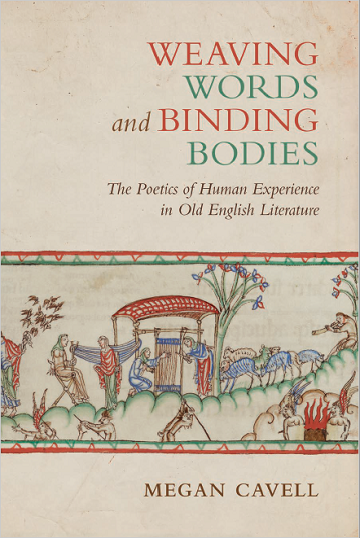 References to weaving and binding are ubiquitous in Anglo-Saxon literature. Several hundred instances of such imagery occur in the poetic corpus, invoked in connection with objects, people, elemental forces, and complex abstract concepts.

Weaving Words and Binding Bodies presents the first comprehensive study of weaving and binding imagery through intertextual analysis and close readings of Beowulf, riddles, the poetry of Cynewulf, and other key texts. Megan Cavell highlights the prominent use of weaving and binding in previously unrecognized formulas, collocations, and type-scenes, shedding light on important tropes such as the lord-retainer “bond” and the gendered role of “peace-weaving” in Anglo-Saxon society. Through the analysis of metrical, rhetorical, and linguistic features and canonical and neglected texts in a wide range of genres, Weaving Words and Binding Bodies makes an important contribution to the ongoing study of Anglo-Saxon poetics.