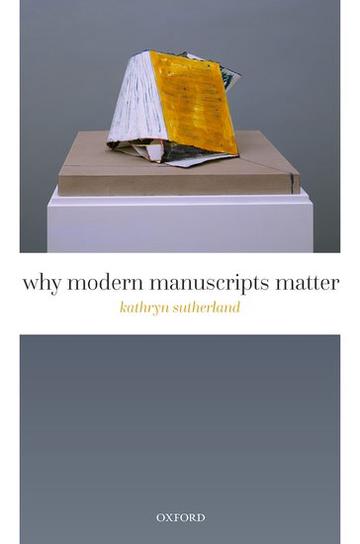 This is a study of the politics, the commerce, and the aesthetics of heritage culture in the shape of authors' manuscripts. Draft or working manuscripts survive in quantity from the eighteenth century when, with the rise of print, readers learnt to value 'the hand' as an index of individuality and the blotted page, criss-crossed by deletion and revision, as a sign of genius. Since then, collectors have fought over manuscripts, libraries have curated them, the rich have stashed them away in investment portfolios, students have squeezed meaning from them, and we have all stared at them behind exhibition glass. Why do we trade them, conserve them, and covet them? Most, after all, are just the stuff left over after the novel or book of poetry goes into print. Poised on the boundary where precious treasure becomes abject waste, litter, and mess, modern literary manuscripts hover between riches and rubbish.

In a series of case studies, this book explores manuscript's expressive agency and its capacity to provoke passion--a capacity ever more to the fore in the twenty-first century now that books are assembled via word-processing software and authors no longer leave in such quantity those paper trails behind them. It considers manuscripts as residues of meaning that print is unable to capture: manuscript as fragment art, as property, as waste paper. It asks what it might mean to re-read print in the shadow of manuscript. Case studies of Samuel Johnson, James Boswell, Walter Scott, Frances Burney, and Jane Austen--writers from the first great period of manuscript survival--are interspersed with discussions of William Godwin's record keeping, the Cairo genizah, Katie Paterson's 'Future Library' project, Andy Warhol's and Muriel Spark's self-archiving, Cornelia Parker's reclamation art, and more.