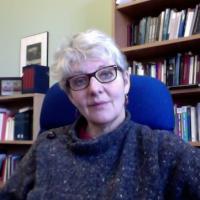 This is difficult to say, because I always seem to prefer the minor genres (e.g. lyric and comedy over epic and tragedy) and so there’s no big blockbuster that changed my life. But I do remember, when I was about 14, a drab-looking school poetry anthology which introduced me to Yeats, D. H. Lawrence, Edwin Muir, T. S. Eliot, Auden, Stevie Smith, Thom Gunn, Sylvia Plath etc. A selection of poems for each poet, fronted by a grainy black-and-white photograph. Somehow this seemed mesmerizingly rich and enigmatic to me, though I’ve no recollection of ‘studying’ it – I think I just read it on my own. But it had an impact on me, because I wanted to read more of this stuff.

I like going for walks. I like poking around churches and manor houses and other ancient buildings, preferably in good company (that is, with my partner and/or old friends). I like cooking, and going to markets. My partner and I also go occasionally to the theatre and to art galleries (for example, the brilliant Joan Eardley exhibition in Edinburgh last year) and we’re always saying we should do this more. Swimming outdoors in warm weather is also something I love doing.

Take two or three of the seven ingredients above and factor in a glass of wine on a warm terrace or by a blazing hearth, and you’ve got it.

I love being by the sea. I love the sea mist (called ‘haar’ in Fife, where I used to live, and ‘fog’ in Berkeley, where I lived before that) and the astringent, salt smell of the air and the way the land just stops. These days I live by a little river, and that’s a pretty good second-best. I used to relish living in cities. I lived in central London, near Russell Square, for many years and at that time I really enjoyed the electric sense of connection, the creative energy and even the grime. But those days are past.

As a child, what did you want to be when you grew up?

A famous artist – or, at the very least, a very good cartoonist. I’m still sorry that I didn’t manage that.

What teacher had the greatest impact on you?

Greatest impact, I don’t know . . . great entertainment value, though. I had a Latin teacher who built us a model of Troy and set light to it in the playground. This did not seem to be an officially approved pedagogic technique, however. Shortly afterwards we got a new Latin teacher.

Do you have pets?

I have a very eccentric and badly-trained collie. It’s always an embarrassment to have people comment on how clever collies are, and how wonderfully obedient, because I seem to have managed to acquire (more or less by accident) a unique specimen of the breed, a canine airhead or four-legged featherbrain, who either can’t or feigns not to remember a single command. But for all that, she’s quite affectionate and appealing. And has enviable Frisbee-catching skills. Of course, she’s not really my dog, she’s my daughter’s . . . but they don’t accept dogs in student accommodation.

I don’t think I ever was a teenager – they skipped that sort of thing at my Victorian-era Edinburgh boarding school.

Well, my partner is now in charge of my sadly neglected musical education. Conventionally enough, I like baroque music and German lieder, but I can now testify to having enjoyed Rosenkavalier…

How would your friends describe you?

A bit neurotic, a faithful correspondent.

ask myself that daily.

Lorna Hutson is Merton Professor of English Language and Literature, specialising in literature of the early modern period. She has for some time been interested in forensic rhetoric, English law and the dramatic imagination. More recently, she has been working on Leverhulme-funded project entitled Shakespeare’s Scotland, 1503-1616, which brings the distinctive and conflicting historiographies and literatures of sixteenthcentury England and Scotland together.