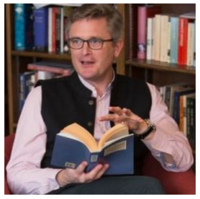 A tricky one. There were so many ‘biggests’, all age-related: a grainy image of the moon landing on the front page of the Cape Times for Monday, 21 July 1969 (age 4), an illustrated retelling of Swiss Family Robinson (age 6), all the Asterix books in Bell and Hockridge’s brilliant translations (from age 7), Caroline Snedeker’s Theras: The Story of an Athenian Boy (age 11), Lord of the Rings (age 14), Conrad’s ‘The Secret Sharer’ (age 16), Mphahlele’s Down Second Avenue and Orwell’s Down and Out in Paris and London (age 18), Gordimer’s Burger’s Daughter and Coetzee’s Dusklands (age 19), Finnegans Wake (from age 24).

I dabble: in cooking, music, new (preferably remote) places, and subjects or languages I know nothing about.

A day of productive loafing, which ideally results in me learning something new or finding a way around or through a problem, small or large.

When did you learn there was no Santa Claus?

A family friend, two years older than me, set me on the path to atheism when I was about 6. I was relieved because I always found Santa a bit alarming.

As a child, what did want to be when you grew up?

At various stages roughly in this order: an astronaut, an archeologist, a French chef, an American blues guitarist.

This would be so much easier to answer if you said ‘teenage’! Plenty of heroes, mostly musicians, from about 14, but before then I’d be torn between some real-life teenagers I idolized in my neighborhood, many of whom were musicians, and some strange composite of the Goons, Marlon Brando, Mohammad Ali, John Lennon and Han Solo.

Which teacher had the greatest impact on you?

At school? Many but mostly negatively—I never wanted to be like them. At university? Again many and mostly positively. If I had to single one out, then probably Seumas Miller, a no-nonsense Australian philosopher who, in 1987, asked me why literary academics were not talking about literature as an innovative mode of thinking in its own right.

The cooking and music skills, plus the prize draw of an eccentric grandmother, generated some status.

Guitar and keyboard virtuosity in almost any genre, though with a particular steer towards those who blur rock, jazz, blues and more.

Arendt, Buddha, Jesus, Tagore and Nietzsche, ideally all at once.

A little over six foot.

Most: helping people younger than me find the confidence to think for themselves and to master the art of free expression. Least: filling in annual REF returns.

A question I often ask myself when doing the last part of the previous question. But, taking the ‘we’ to mean ‘the English Faculty’ (which is what I hope you mean), then the first part of the above plus to keep the creative potential of language and the public value of literary writing alive. ‘We’ and ‘here’ in any larger sense? Beats me.