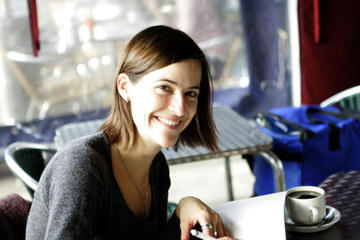 William Empson’s Seven Types of Ambiguity blew my mind in my first year as an undergrad, that there is so much cogent meaning there for the mining in so few, punctuated words on a page. Bakhtin’s Rabelais and His World was another kind of awakening, of how urgent and eclectic literary criticism could and should be. Tristram Shandy is still the most generous hearted, brilliant and hilarious book I have ever read, and began an unrequited love affair with the eighteenth century that I am still in the throes of. And Middlemarch, first, last, always.

Yoga or knitting (very badly) while listening to podcasts.

Hours of uninterrupted reading, yoga, and some knitting that turned out quite well in the end.

Is it wrong to say Oxford?

As a child, what did you want to be when you grew up?

My dog; my parents.

What teacher had the greatest impact on you?

Andrzej Gasiorek at Birmingham University for some unknown reason thought that I was good at literary criticism. I’ve been trying to justify his belief in me ever since.

I would love to have Emily Dickinson over, although she’d hate every cursed minute of it and shut herself in a cupboard for the duration, George Eliot, see above, Aphra Behn, James Baldwin, though it would have to be summer, so that we could keep all the windows open to let the cigarette smoke out, and Mary Wollstonecraft, who by all accounts was always excellent company at dinner, even when ill or chronically depressed.

I can describe myself in a story. Once, I interviewed a tightrope walker. She was tattooed from head to foot, had a shaved head, and was as graceful as silk on a tightrope. She never used a safety net. I asked her, ‘aren’t you afraid?’ and she said ‘I’m afraid all the time. Every hour, of every day, of every year, I am afraid. It’s only when I’m up here that that emotion makes sense. It’s a huge relief.’

Somehow, this anecdote made sense of my entire life.

How would your friends describe you?

I love making sense of difficulty, when the photograph develops in the darkroom into something recognisable and real that you can show to people. I hate not being able to find sources that feel crucial, or, after a long search, discovering that they aren’t.

Why are we here? To ask questions?

I have a long-cherished fantasy about being a yoga teacher, but my inability to tell my right from my left would make this a challenge in more ways than one. I like to think I’d be podcasting and writing, but the truth is I’d be applying for jobs wherever I could get one. I feel outrageously lucky.

Dr Lucy Powell takes up a three-year Leverhulme Early Career Fellowship in the Faculty of English in January 2021. She will research birds and the global imaginary in the long eighteenth century. Her previous project looked at prison cultures in eighteenth-century novels, and is the subject of her forthcoming book – British Prison Fictions: the prison and the novel, 1718-1780.