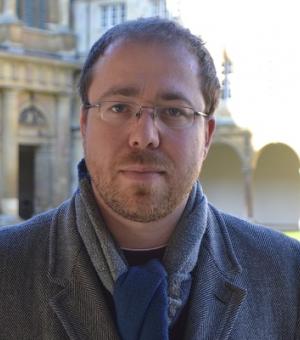 I grew up in Brighton, and as an undergraduate I read English at Sidney Sussex College, Cambridge.  After graduating I went to Princeton, initially for a year as the Eliza Jane Procter Visiting Fellow, and stayed there to complete my PhD.  From 2010 to 2018 I was a Fellow and Director of Studies in English at Trinity College, Cambridge.  I joined the Oxford Faculty in 2018.  In 2019 I was awarded a Philip Leverhulme Prize.

I work principally on the literature and culture of the sixteenth and seventeenth centuries.  My thinking about this period usually gets drawn back, in one way or another, to Spenser’s Faerie Queene and Milton’s Paradise Lost, and more broadly to the relationship between words and bodies. I’ve tended to work at the intersection between literature and contiguous fields – theology, science, visual arts – and have longstanding interests in critical theory; recently I’ve been getting excited about the implications for literature of recent work in anthropology.  I'm also intersted in biography and life-writing, and early modern epistolarity.

My fourth book, an experimental biography of John Milton titled Making Darkness Light, was published by Basic Books in September 2021. In it I interweave a narrative of Milton's life with explorations of the imaginative worlds of his major poems and reflections upon what it means to me to live with his poetry.

My third book,  Iconoclasm as Child’s Play (Stanford University Press, 2019), begins with the fact that, during the reformation, formerly holy things were sometimes given to children as toys rather than being broken or burned.  In it I consider the conceptual intersections between iconoclasm and play in sixteenth century culture, and in later philosophical writing (especially T.W. Adorno and Alfred Gell).  An article on Spenser emerging from this work appeared in PMLA.

My second book - A Stain in the Blood: The Remarkable Voyage of Sir Kenelm Digby – was about the seventeenth century polymath Kenelm Digby (1603-65), whose interests spanned literature, theology, natural philosophy, mathematics, alchemy and cookery.  Aimed at the general reader, it focused on Digby’s 1628 Mediterranean sojourn, and was published by William Heinemann in 2016 (paperback 2017) and shortlisted for the James Tait Black Prize for biography and the Elizabeth Longford Award for historical biography.  I’m not yet done with Sir Kenelm, and am editing his correspondence (under contract with OUP), for which I have discovered a significant number of new letters.

My first book, Feeling Pleasures: The Sense of Touch in Renaissance England (OUP, 2014; paperback 2017), explored the varied and contested importance of touch.  I combined sustained analyses of specific figures - particularly Spenser, Lancelot Andrewes, and Milton - with explorations of areas including the touching of relics and the Eucharist, of paintings and sculptures, the role of touch in faith healing and experimental science, the philosophical history of tickling, and the early reception of Chinese medicine in England.

`I am a series editor for the Edinburgh University Press series Edinburgh Critical Studies in Renaissance Culture, which I co-edit with Prof Lorna Hutson and Dr Kathryn Murphy from the Faculty of English, and Prof Katherine Ibbett from the French department. We are interested in proposals for monographs on renaissance literature and culture, especially those with an interdisciplinary bent.

Papers on English literature and its contexts from 1500 to 1750; critical theory; graduate teaching in early modern literature.

I enjoy finding ways of communicating my research to a wide and varied audience.  In 2015 I was selected as one of the ten BBC/AHRC New Generation Thinkers. I  presented aspects of my work on Radio 3 during 2015-16, and have continued to do so.  I have appeared on panel discussions on Caravaggio, Milton, the photography of Cindy Sherman, and, most recently, explorations of the human knee and of the history of the bedroom. My first radio documentary, to mark the 350th anniversary of Paradise Lost, was broadcast on Radio 4 in August 2017.

My reviews and essays have appeared in publications including The TLS, The White Review, The Financial Times, and The Observer.

My research has been supported by the Leverhulme Trust, the British Academy, the Cambridge Centre for Research in the Arts, Social Sciences and Humanities (CRASSH), the Andrew W. Mellon Foundation and the American Council of Learned Societies.