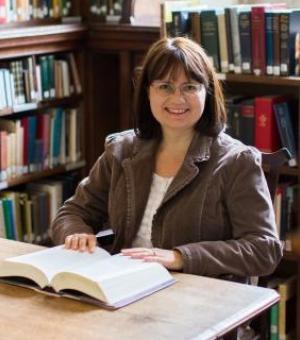 Though I belong to the Faculty's Modern & Contemporary Period Group,  I think and write about 'big' literary history, and have published on authors from Homer to George Gascoigne (c. 1535-1577) to Dunya Mikhail.

Currently, I am writing a literary history of silence, funded by a Major Research Fellowship from the Leverhulme Trust.  Over eleven centuries of English Literature, silence has had many guises and many hiding-places.  My book will guide readers on a tour taking in the silent states of exile on icy seas described in Anglo-Saxon poems, the hushed intimacy of medieval lullabies, exalted states of blissful union with the divine, the tongue-tied lovers of the Renaissance, spell-binding silent scenes in Shakespeare, encrypted expressions of same-sex love, reason-based reticence, the Romantic sublime, the surprising silences of the garrulous realist novel, the great epics of inarticulable grief, wordless communings with Nature, experimental Modernist silence, the failure of words in the face of two World Wars, the soul-destroying silences of Samuel Beckett and Harold Pinter, the moments of quietness so rarely carved out of 21st-century life, and the lost voices of those censored and marginalized throughout history.  In the process, I will excavate the intellectual and cultural ideas behind silence, from medieval theosis to psychoanalysis, from Tractarianism to Quakerism.

In tandem with this literary history, I am editing an anthology of poems about and evoking silence, Silence Please, for Bodleian Publishing. I am also thinking about a critical methodology for responding to textual silences.  With the historian Suzan Meryam Kalayci and the Ritblat Professor of Mindfulness and Psychological Science, Willem Kuyken, I am leading the Silence Hub (SH), an inter-disciplinary, public-facing network for scholars interested in silence. In 2017, I held a Knowledge Exchange Fellowship at the Oxford Quaker Meeting, beginning to learn about silence, spirituality and poetry.  Future plans include a small exhibition on silent study and further performances of silence.

My interest in silence arose, counter-intuitively, from the work I have done to date on war writing.  My latest monograph, Veteran Poetics: British Literature in the Age of Mass Warfare, 1790-2015 (2018), reads a single figure - the war veteran - in the literary-philosophical contexts of the age of modern, mass, industrialized warfare, illustrating how ex-combatants have been deployed by authors from William Wordsworth to J. K. Rowling to explore questions relating to being, knowing and communicating.  What can be recovered from the past? Do people stay the same over time? Are there right times of life at which to do certain things? Is there value in experience? How can wisdom be shared?  The final chapter looks at the figure of the silent war veteran - the former fighter who, against expectations, refuses or is unable to tell stories about the wars he has been in - and suggests that this expresses an epistemological crisis central to understanding modernity.

My previous publications include Authoring War: The Literary Representation of War from the Iliad to Iraq (2011), Martha Gellhorn: The War Writer in the Field and in the Text (2007) and, as co-editor and editor, The First World War: Literature, Culture, Modernity (2018), Writing War, Writing Lives (2017) and The Cambridge Companion to War Writing (2009). In 2017-18, I co-convened a Mellon-Sawyer international seminar series, Post-War: Commemoration, Reconstruction, Reconciliation.  To foster scholarly collaboration and collegiality in the field of war representation, in 2010 I co-founded the War and Representation Network (WAR-Net), with Professor Gill Plain of the University of St. Andrews.  WAR-Net is now a network of scholars across Britain, Europe, North America, Latin America, the Middle East, Asia and Australasia, with some 500 members. With Gill, I am also co-General Editor of the monograph series Edinburgh Critical Studies in War & Culture. We welcome book proposals from scholars at all stages of their careers.  I also founded and co-convene the Writing War research cluster here in the Oxford English Faculty.

In the more focused time-frame of Modern and Contemporary Literature, I have published on topics from moments of insight in Henry James and Dorothy Richardson to Virginia Woolf’s brackets to tiredness (as opposed to exhaustion) in the post-war novel.  I am the editor of The Modernist Party (2013), which includes my own essay on why J. Alfred Prufrock is so afraid of going to a tea-party, and co-editor of Memory, Mourning, Landscape (2010) and Tove Jansson Rediscovered (2007). I am also the editor of British Literature in Transition: 1960-1980 - Flower Power, which includes an essay by me on light effects in Philip Larkin's poetry. I regularly review contemporary fiction for the national press.

I am particularly interested in supervising dissertations on literature and silence (any aspects), and am also open to proposals on war writing, Modernism, and 20th- and 21st-century literature more generally.

I read English Language and Literature as an undergraduate at Somerville College, Oxford, and took an MPhil in Renaissance Literature at St. John's College, Cambridge. I then qualified as a barrister and worked for the Government Legal Service for seven years, with stints at the European Commission in Brussels, the Conseil d'Etat in Paris and the Office of the Parliamentary Counsel, before returning to Somerville for an MSt, this time in modern literature, and a DPhil. I was then a Junior Research Fellow at Balliol College, Oxford, a Lecturer and Senior Lecturer at the University of Glasgow, and a Senior Lecturer and Reader at Birkbeck, University of London. In 2014, I became a Tutorial Fellow of Harris Manchester College. I have received Teaching Excellence Awards at both Birkbeck and Oxford. I'm also a published poet and an Associate of the Royal College of Music in piano performance. I love studying languages, am pretty competent in French and Italian and have also tackled (with varying degrees of success and no fluency) Arabic (modern standard), German, Latin, Hebrew (biblical), Russian, Spanish and Yiddish.