The study of postcolonial or international literatures in English has been carried out within the Faculty of English at Oxford since the early 1990s. World literature and postcolonial literary studies now forms a leading research area in the Faculty, which was consolidated in 2013 with the establishment of the MSt in World literature in English. We have a distinguished record in particular in postcolonial theory, global history at the time of empire, postcolonial book history, and in South Asian and southern African literatures in English. At any one time around 18 doctoral students on average research in the area, on topics ranging from South East Asian literature through to Caribbean aesthetics.

Since 2001 and fortnightly throughout the year in term, the lively Postcolonial Writing and Theory seminar takes place at Wadham College. Convened by Professors Boehmer and Mukherjee, the seminar is a hub for postcolonial scholars and researchers across the Humanities, extending from MSt students through to senior researchers. In recent years the seminar has featured papers by Emily Apter, Anna Bernard, Ato Quayson, David Palumbo-Liu and Joseph Slaughter, and has also hosted a range of lectures and readings by eminent postcolonial and international writers, including J.M. Coetzee (in 2009 and 2014), Tsitsi Dangarembga, Kamila Shamsie and Hisham Matar.

Oxford offers exceptional resources for anyone interested in doing substantial research into the history of colonialism and its postcolonial and global aftermaths. It is home to the second largest living archive in the United Kingdom, the Bodleian Library and its many affiliates, including the Centre for the Study of the Book, Rhodes House, the Oriental Institute Library, and Queen Elizabeth House. With Oxford University Press, Pearson Education, Macmillan, Wiley-Blackwell, the African Books Collective, Oneworld and James Currey all based in the city, Oxford is also one of the major centres of the contemporary Anglophone publishing world.

The MSt strand World Literatures in English offers students the opportunity to investigate leading questions and debates in colonial, postcolonial, transnational and global literary studies through the medium of taught courses and a dissertation. 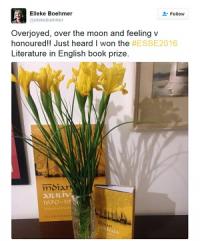 Elleke Boehmer, The Shouting in the Dark. Sandstone Press. 2015.

Ankhi Mukherjee, What is a Classic? Stanford UP. 2014.

The African Studies Centre regularly hosts seminars and workshops on topics related to issues of postcolonial identity and interpretation.