The Professor of Poetry lectures were conceived in 1708 by Berkshire landowner Henry Birkhead and began after he bequeathed some money so it could be a valuable supplement to the curriculum. He believed ‘the reading of the ancient poets gave keenness and polish to the minds of young men as well as to the advancement of more serious literature both sacred and human’.

The first poetry professor, Joseph Trapp, took as his subject poetry in general. He was mainly concerned with the classical poets – particularly Roman writers. William Hawkins, professor from 1751 to 1756, was interested in drama and more modern works, and was renowned for quoting extensively (in Latin) from the works of Shakespeare during his lectures.

Many distinguished men of letters held the Chair in the eighteenth and early nineteenth centuries, including two Thomas Wartons - both father and son - and the poet and religious leader John Keble. However, it was Keble's godson, the great Victorian poet and critic Matthew Arnold, uniquely elected twice to the Professorship (in 1857 and 1862), who really created the Professorship in its modern form: Arnold spoke about literary matters of contemporary concern, and was the first Professor to deliver his lectures in English, as opposed to Latin.

A new Professor of Poetry is appointed every four years. All members of convocation are eligible to vote in the election. He or she must give a public lecture each term and, by convention, the Creweian Oration at the University's honorary degree ceremony every other year.

The current Professor of Poetry is Professor Alice Oswald. She will be giving one lecture each term for the four years of her tenure.

Professor Oswald was elected in June 2019 and gave her Inaugural Lecture on Wednesday, 13 November 2019 at 5.30pm in the Exam School.

You can listen to Professor Oswald's Inaugural Lecture here.

You can watch or listen to Professor Oswald's online lectures, supported by TORCH (The Oxford Research Centre in the Humanities) below. 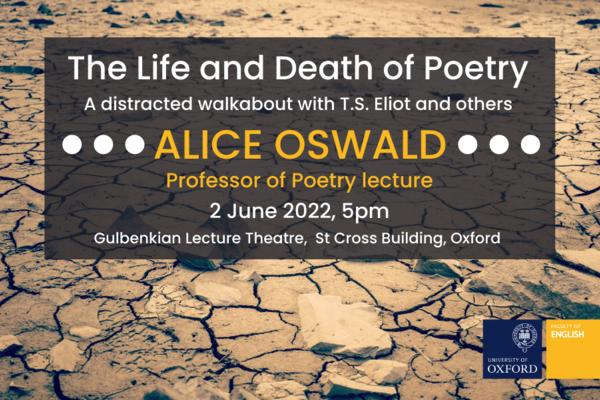 Listen to the audio recording of The Life and Death of Poetry on the University podcast site.

View a transcript of the talk 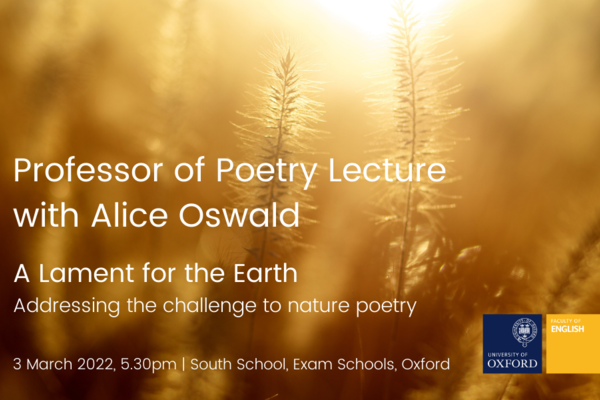 Listen to the audio recording of A Lament for the Earth on the University podcast site.

View a transcript of the talk

Listen to the audio recording of In Sleep A King on the University podcast site.

View a transcript of the talk.

On Behalf of a Pebble

Listen to the lectures given by Prof. Simon Armitage during his time as Professor of Poetry.

Listen to the lectures given by Sir Geoffrey Hill during his time as Professor of Poetry.